On 15 April, James Cattell (a pioneer in #oneteamgov) and part of the Systems Unit in the UK Cabinet Office (https://www.gov.uk/government/groups/systems-unit) – posted this tweet: https://twitter.com/jaCattell/status/1250357135428521984

The tweet, which was sent entirely in a personal and unofficial capacity, read:

I work in a central government team that’s helping build a strategy for the United Kingdom’s renewal after we’ve recovered from #coronavirus.
Who should we be listening to?
What questions should we be asking?
Where has this approach (not) worked well before?
Please share!
This received 1,800 retweets, 1,600 likes and over 1,500 replies.

Vinay Débrou (https://vinaydebrou.com/), a member of the PSTA’s learning community, https://www.publicservicetransformation.org/2020/04/the-days-after-a-learning-community-to-build-back-better/, and the Yak Collective (https://www.yakcollective.org/projects/dont-waste-the-covid19-reboot/), volunteered to parse the replies into excel we have been able to do some analysis of the replies. The raw scraped data from this analysis (public data scraped end April and cleaned 10 May) is available here: (https://www.dropbox.com/s/n3iikj0lt8q4gzv/2020-06-02%20Replies%20Data%20to%20JaCattell%20Tweet%20JP%20analysis%20v0.5BT.xlsx?dl=0)

“>at this link (Excel format).

Here are some key points and thoughts from the analysis:

• The most-cited single theory, approach, or recommendation is around Kate Raworth’s Doughnut Economics (https://www.kateraworth.com/), centred around ‘humanity’s 21st century challenge… to meet the needs of all within the means of the planet’, with a total of 34 references.

• Many of the tweets are from special interest and lobby groups promoting their causes in this context. Not all will be relevant but rather a chance to pressure where a door into Whitehall might be thought to have been opened. Does this indicate that there is not much opportunity for people to have their say and for these groups to get heard at the moment in what is a centrally led response and the focus is on crisis management?

• This along with politically motivated responses and an element of abuse limits the overall analysis.

• There are many links to research, think-pieces, agendas and blogs and it is apparent that so much thinking is already out there or being done at the moment which is relevant to the current situation which can be harnessed. This could be grouped into themes for further research. In particular, Kate Raworth features in the wordcloud with over 20 mentions and also in the analysis of most-liked tweets, suggesting that there is breadth and depth of support for Doughnut Economics as a lens or framework for renewal.

• This Wordcloud analysis of key words with over 20 mentions is useful and emphasises where the sentiment is. 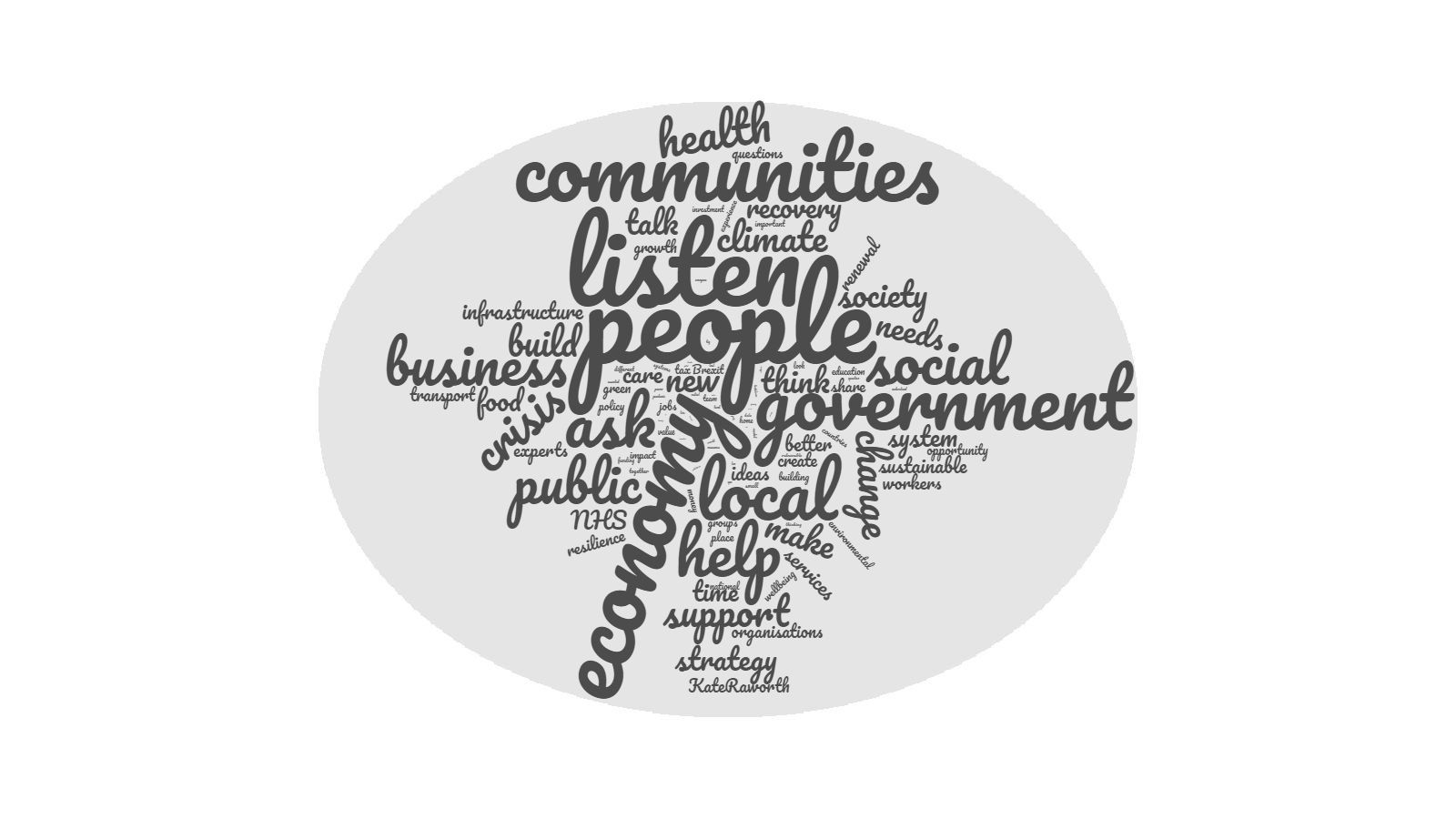 • ‘People’ has the highest number of mentions followed by ‘listen’ suggesting that there is a call to focus on developing policy and ideas with consultation and involvement of people. ‘Ask’ is also a similar trend.

• ‘Communities’, ‘economy’ and ‘government’ all present equally in the response, interesting as it indicates a balance in perspective and also ties in with the varying theme of a systemic transformation (covering environment, climate, economy, society, finance, business etc.)

• ‘Local’ also features, perhaps reflecting the recognition in local networks that have proved critical in the response so far.

• If the replies which got more than 20 likes are analysed into themes, the overwhelming area of interest and support is sustainability and wellbeing. This has 3 times as many likes compared to the second most popular, ‘listening to people’. 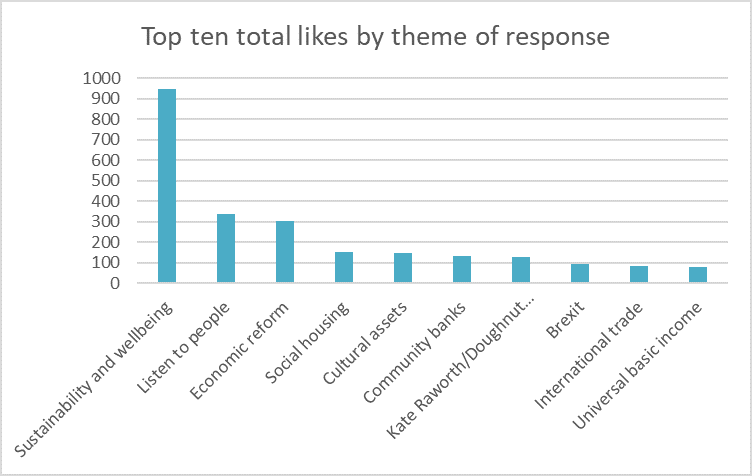 There are some key points arising from this:
• There is a strong feeling that people from across society need to be at the heart of the next steps.
• There is broad support for a more sustainable model generally underpinned by economic reform (though the theories and approach vary).
• A focus on interdependencies and transforming the system as a whole, particularly linked back to varying approaches to ‘sustainability’.
Alongside these, ‘listen to people’ and ‘ask for help’ seem to be the key recommendations for renewal.

We will leave it to the reader to determine whether anything from this input in response to an unofficial, personal tweet. made it through to the UK Government’s plan to rebuild, published on 26 May.

This site uses Akismet to reduce spam. Learn how your comment data is processed.

This work is licensed under a Creative Commons Attribution-NonCommercial-ShareAlike 4.0 International License.